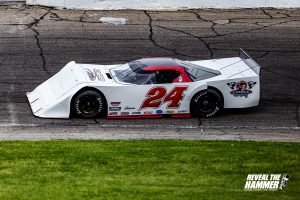 Elkhart, Ind. (May 18, 2021) – After leading much of Round 1, only to have a late race mechanical issue, Tyler Roahrig dominates the second half of Round 2 to take the win at Anderson Speedway. The very fast high-banked quarter mile saw the Plymouth, Indiana driver take the checkered flag over six seconds ahead of runner-up Steve Needles.

As per Reveal The Hammer rules, the starting field was deeply inverted ensuring the fans would see a great show. The start of the CB Fabricating 100 saw front row starter Shawn Amor take a commanding lead early on, but as the race progressed, the Roahrig family racers began to reel in the black #6 hot rod. On lap 43 Amor tangled with lapped traffic putting himself and Rick Hahn Jr. into the Turn One wall. Suddenly JR Roahrig ran out of real estate and found himself tangling with the two cars that were up into the wall. Fortunately, the drivers were fine, but the three race cars were done for the night.

On the restart, Tyler Roahrig immediately took command of the race and stayed out front for the remaining 57 caution-free laps to take the win. Steve Needles, the Round One winner finished second and Brandyn Ross completed the podium.

Throughout the evening Reveal The Hammer marketing partner Op1Vet gave every Military Veteran that registered at their display a chance to win $1500. Just before the start of the 100-lap feature, a name was drawn, and a proud defender of our country went home with a big smile. Reveal The Hammer thanks everyone that has and is serving our country.

After two rounds of racing, Steve Needles leads the points championship with Tyler Roahrig only 12 points back with Shawn Amor, Brandyn Ross, and Craig Everage all within 22 points of the leader.

The next stop on the Reveal The Hammer Outlaw Super Late Model Tour is Wednesday, June 9 at Berlin Raceway in Marne, Michigan. 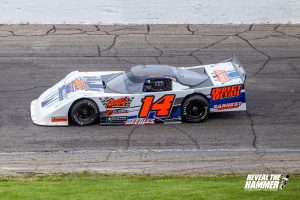 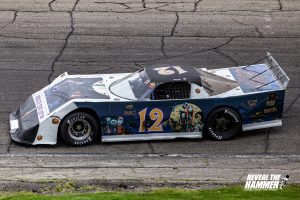