The Saturday evening event saw Birch Run Speedway bring back the Dixie Classic to their track schedule with the Reveal The Hammer Outlaw Super Late Model Tour headlining the big night with its Opt1vet 100, $5,000-to-win season finale. The packed grandstands saw a full schedule of trucks, stock cars, and 4-cylinders complete along with the RTH Tour.

The night began with Tyler Roahrig claiming the Allstar Performance Quick Time Award with a new track record of 14.385 seconds. The starting inversion put polesitter Roahrig back into the fifth row for the start of the final 100 laps of the RTH season.

At the drop off the green flag, front row starter Alex Hagon led the field early on. By lap 20 Steve Needles moved to the front of the pack only to pull off a short time later with steering issues. Similarly, Tyler Roahrig saw his night early as well.

As the night progressed there were several battles for the top spot. Just before the halfway point of the race Daniel Leeck worked his way to the front and opened a substantial lead. Behind Leeck, Shawn Amor and Scott Hantz put on a great show for the fans as the two fought for the runner-up spot. Eventually Amor took the position and held it to the checkered flag.

After all the points were tallied, the inaugural Reveal The Hammer Outlaw Super Late Model Tour Championship went to Steve Needles, with Shawn Amor taking second place just 12 points behind.

Throughout the race program every Reveal The Hammer t-shirt purchase was eligible for the Op1vet.com drawing, and just after the RTH feature a lucky race fan went home with $500.

During the 2021 Reveal The Hammer Tour, thirty-eight different drivers earn points during the seven race (two rounds were cancelled due to weather) season as four different racers took home wins.

The RTH group thanks all the drivers that participated as well as all the fans that came out to watch the “Fastest Short-Track Show on Pavement”, the Reveal The Hammer Outlaw Super Late Model Tour. 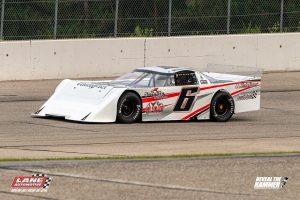 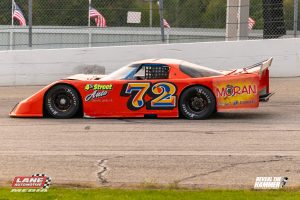 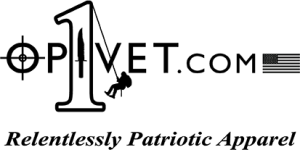