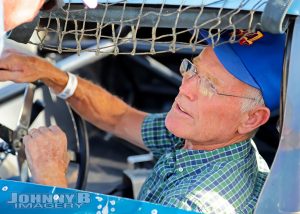 As the Outlaw Late Models lined up on the front straightaway for the feature, legendary Hall of Famer Bob Senneker pulled his familiar #84 Camaro to the front of the field acting as the honorary pace car for the main event.  The grid saw a complete inversion for the 60-lap George Keen Memorial. The start saw Austin Maynard and Brock Ganus break away for the rest of the field.  On lap 8 Brian Maxim had a hard impact into the front straightaway wall that also collected polesitter Bergekker and Buddy Gray. 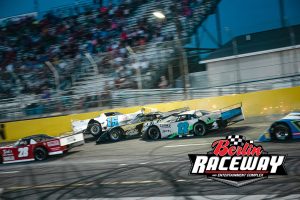 The restart saw Trevor McCoy take command of the race with current RTH points leader Steve Needles in close pursuit. For a time, it looked like McCoy had the upper hand on Needles, but a caution came out on lap 38 as Phil Bozell grenaded an engine. The final restart of the night was what the Needles needed to get a fender under McCoy to take the lead and the win, the third Tour win of the season. 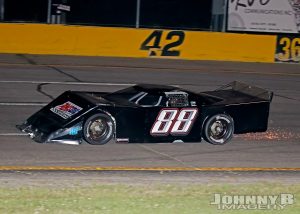 With Steve Needles taking the win Trevor McCoy pressed on for a solid runner-up finish, as Scott Thomas ran a hard and solid race to take the final spot on the podium.

“I have to thank my crew for prepping a great car tonight,” remarked Steve Needles during the Winner Circle interview. “I love racing at Berlin. This place is fast, it’s hard to learn, but it makes you a racer. It’s one of the best short-track facilities in the country.”

The final race of the 2022 Reveal The Hammer Outlaw Late Model Tour is less than two weeks away, on Saturday, September 10 at Birch Run Speedway.