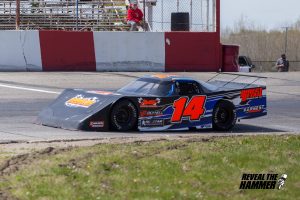 Elkhart, Ind. (May 11, 2021) – The first race of the inaugural Reveal The Hammer Outlaw Super Late Model Tour saw a determined Steve Needles come through the field to win the Ginger Phillips Memorial 100-lap feature at New Paris Speedway. The stout field of 17 competitors saw several lead changes before Needles took control with just a handful of laps before the checkered flag.

The early evening qualifying session saw Tyler Roahrig edge out Needles by .002 second for the Allstar Performance Quick Time Award. The inversion put the two top qualifiers in the seventh row for the start. After a few lead changes early on, the Tyler and JR Roahrig “show” took control of the race.

While the Roahrigs were battling for the lead, Needles would race his way into the top-5 only to have a setback that would lose much of the made up ground. Undaunted, the driver of the #14N would once again work his way into contention by lap 85.

With ten laps to go with Tyler Roahrig trails father JR Roahrig for the lead. The next lap Tyler falls off the pace as the next few in line move up a spot. The impending restart has Shawn Amor and JR Roahrig come together heading into Turn One, sending Roahrig into the grass. The excursion ends the night for the elder Roahrig and moved Amor into the lead. On lap 95 Steve Needles completed the charge, diving underneath Amor heading to Turn One to take the lead. At the flag its was Steve Needles for the win, a late charging Jack Landis finished second, and Shawn Amor landing on the final step of the podium.

“Earlier, I got together with JR and I take responsibility for that,” remarked Needles. “Then we got close towards the end, but I didn’t think things would shake out like they did that’s for sure. It was awesome. Can’t wait to get to Anderson next week!” 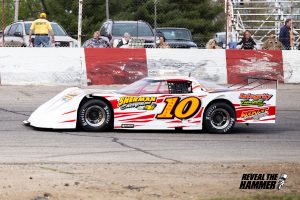 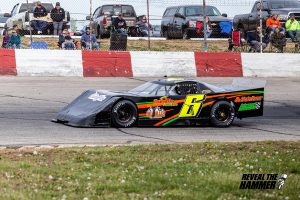